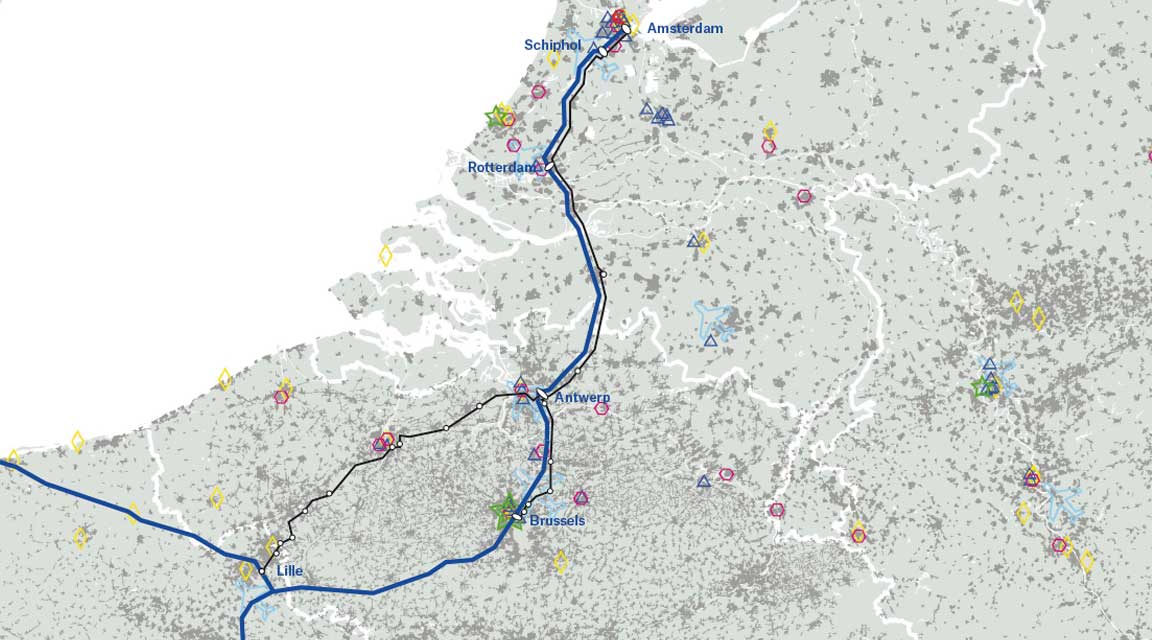 corridor to Brussels, Paris or London. 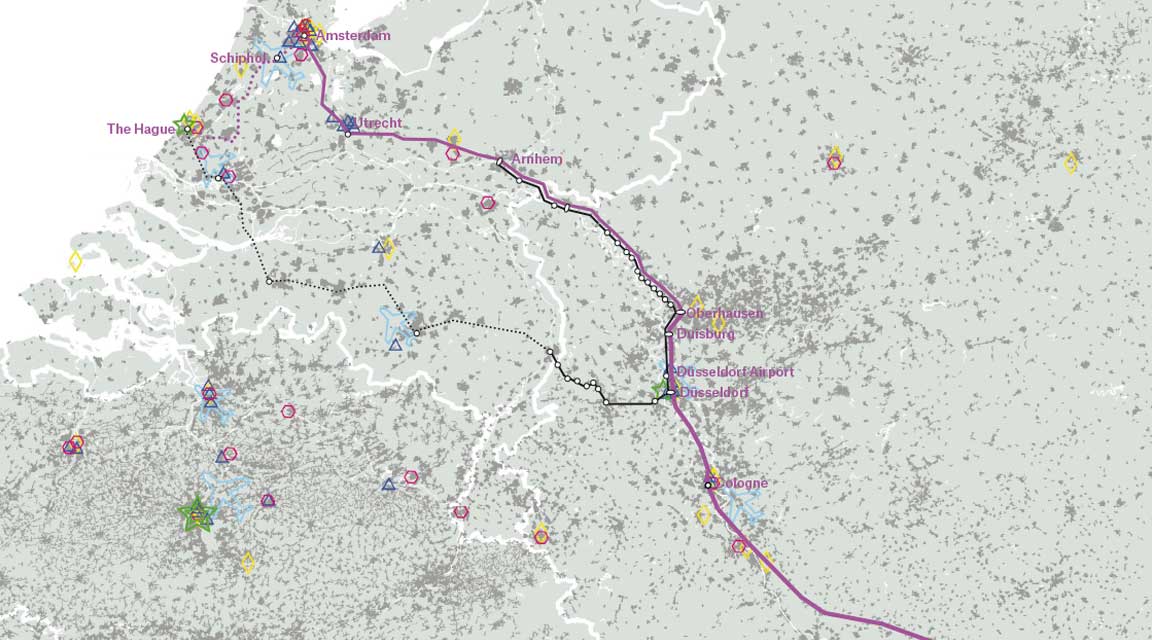 corridor to Frankfurt and Basel. 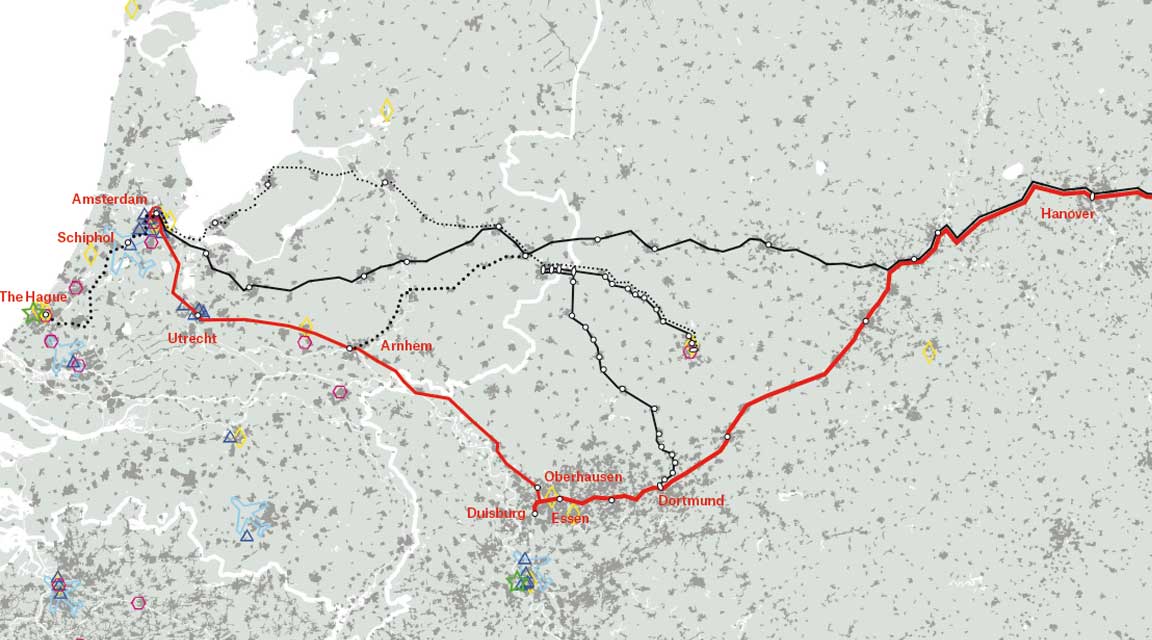 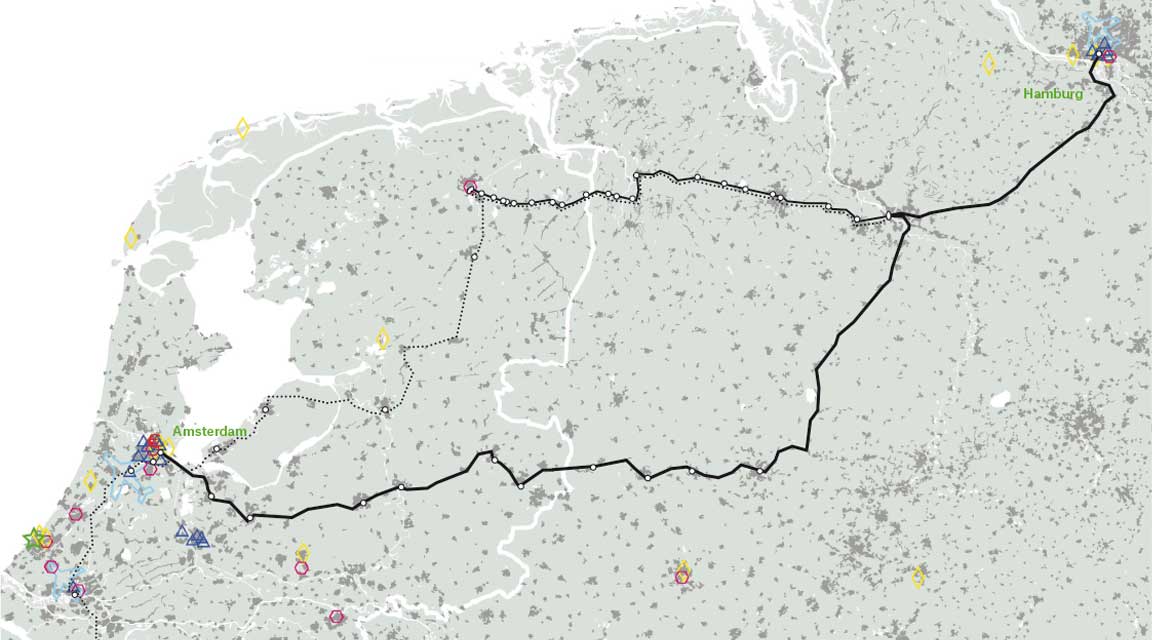 corridor to Hamburg and Copenhagen.

Never waste a crisis and we are hopeful that the COVID 19 crisis will push forward the European Green Deal (EGD). However, the proposed deal (December 2019) lacks the needed support for a trans-European high-speed passenger train network. Even though the benefits of such a network will favour several actions of the EGD, them being the European Union (EU) as a global leader, a just transition and investing in a climate neutral economy.

EU as a global leader

Increasingly mega regions play a key role in the global competitiveness between countries or even continents. We can find these regions in the USA, Asia and the EU.

Next to the economic effect of COVID 19, Brexit is looming and as a result the EU will lose one of the eight European mega regions. A trans European high-speed rail network will strengthen the remaining EU mega regions and show the world that sustainable transport is key for a sustainable and successful exchange of knowledge and service in and between mega regions.

If the EU, post Brexit, wants to (at least) consolidate its position in the global knowledge and service economy, several of the remaining seven EU mega regions need high-speed rail investments so they can improve their trans European and internal mega region connectivity. Even if these are long-term investments, the first steps needs to be taken today.

Also in the short term these regions can step up their game, by increasing frequency, improving user experience (availability, punctuality, quality, accessibility and price) and adding fast cross-border services on the existing network. Both short and long-term actions are needed to, in a sustainable way, stay equally competitive with the existing and rising mega regions in the USA and Asia. 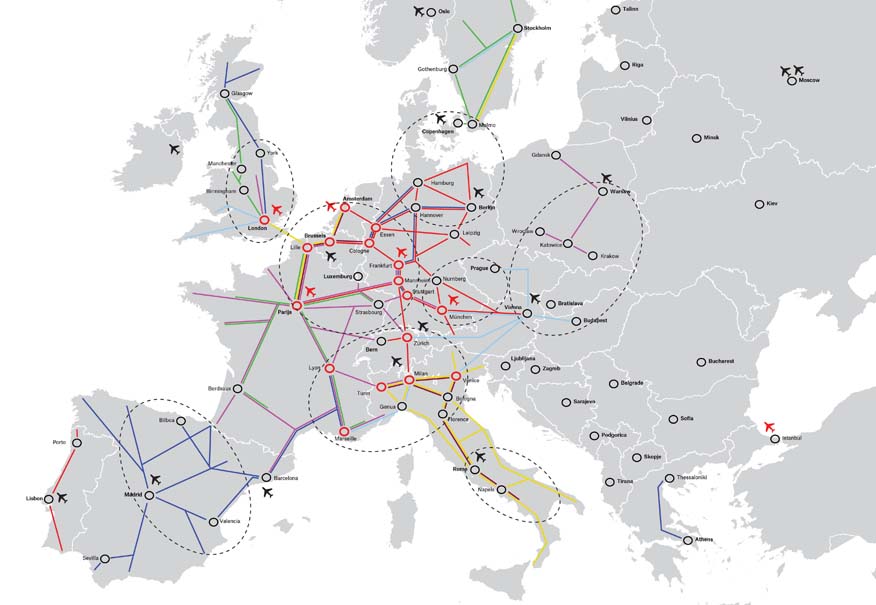 Some of the stations of the trans-European high-speed network are also medium sized cities or towns and some are even hub stations, opening opportunities to reposition their city. Furthermore fast trains can use the high-speed network and have more stops in a mega region, a borderless system is however a precondition.

For medium sized cities or towns near a metropolitan area, the last mile connections from the high-speed stations in that area, to these cities need to be smooth and frequent. Our plea is to focus on mobility on all scales (European scale to last mile).

Investing in a climate neutral economy

We need to look at the broader benefits of a trans-European high-speed network can give, such as benefits for urban planning (integrated area development, accessibility and mobility, quality of life, energy efficiency, social housing and borrowed size), for the climate (substitution for short distance flights) and for the consumer (shift to a sustainable alternative). 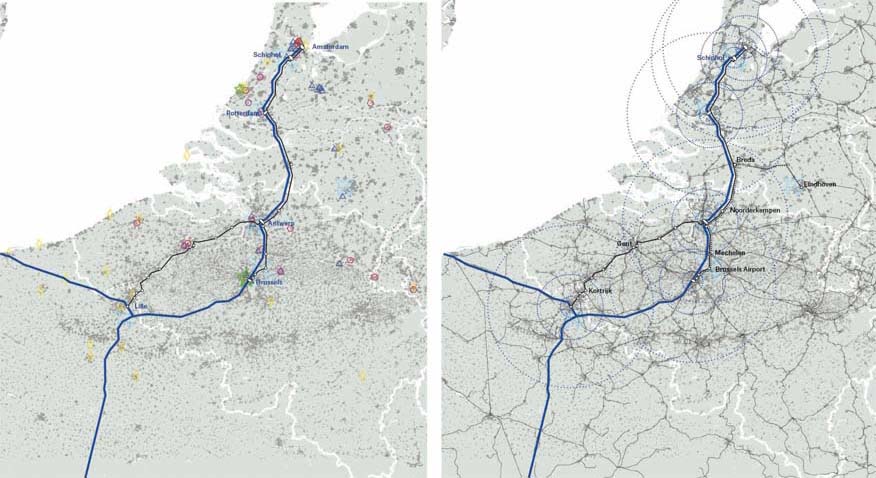 corridor to Brussels, Paris or London.

The Eurodelta is one of the seven remaining European mega regions, which consists of the Benelux countries, added by North Rhine-Westphalia and the North of France. Although it is a cross-border mega region, its cross border public transport is still scarce.

In this quick scan, we therefore focused on the future potentials for a Dutch high-speed network. We scanned four directions from Randstad Holland:

— to Brussels, Paris or London;
— to Frankfurt and Basel;
— to Berlin and
— to Hamburg and Copenhagen,

on how high-speed or fast cross-border connection can as well work at a trans-European as an internal mega region scale. Hereby, we looked at what are the benefits (position mega region in the world, opportunities for medium size cities and towns and strengthening a climate neutral economy), the bottlenecks and the governance.

We concluded that the different researched directions are clearly in another phase of development. The line to Brussels, Paris and London shows the potential a high-speed line can have for trans-European and internal mega region connections. With the looming Brexit, a better connection to Frankfurt seems the next direction to further invest. At the same time we need to check how the investments in this connection can be used for other directions to the East.

Overall a better overview on what are future infrastructure investments and urban developments in the Eurodelta would help to make better strategic investment in our mega region.

projecten In the years to come, it is highly foreseeable that we are going to see a shift from air travel to rail in Northwest Europe. How can high speed rail connections for passenger transport in the Eurodelt