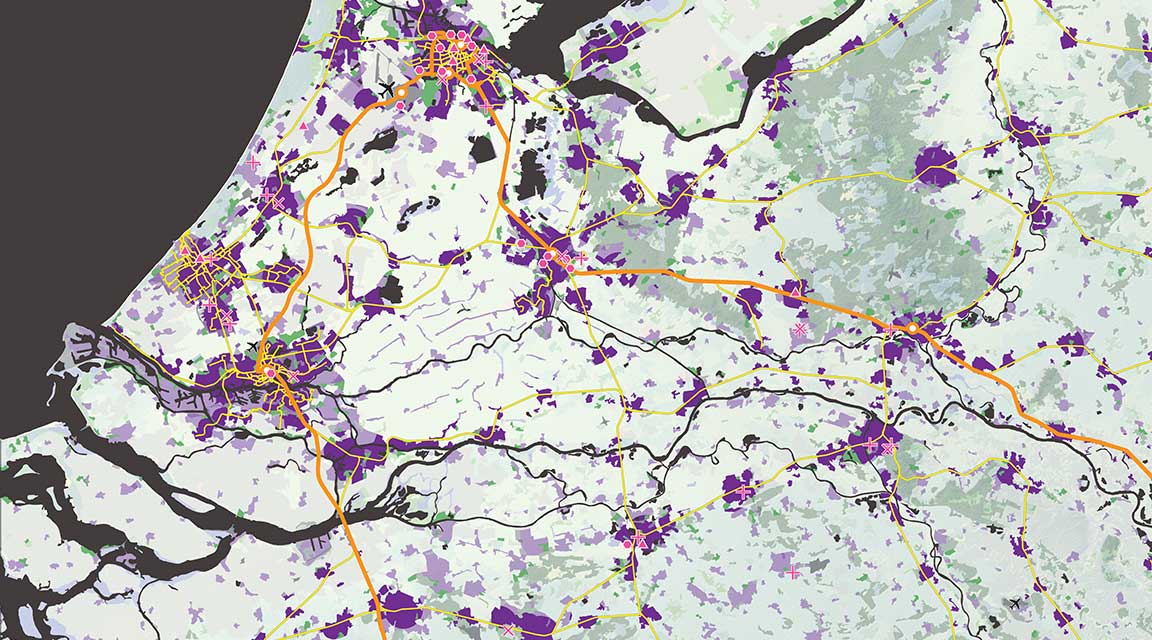 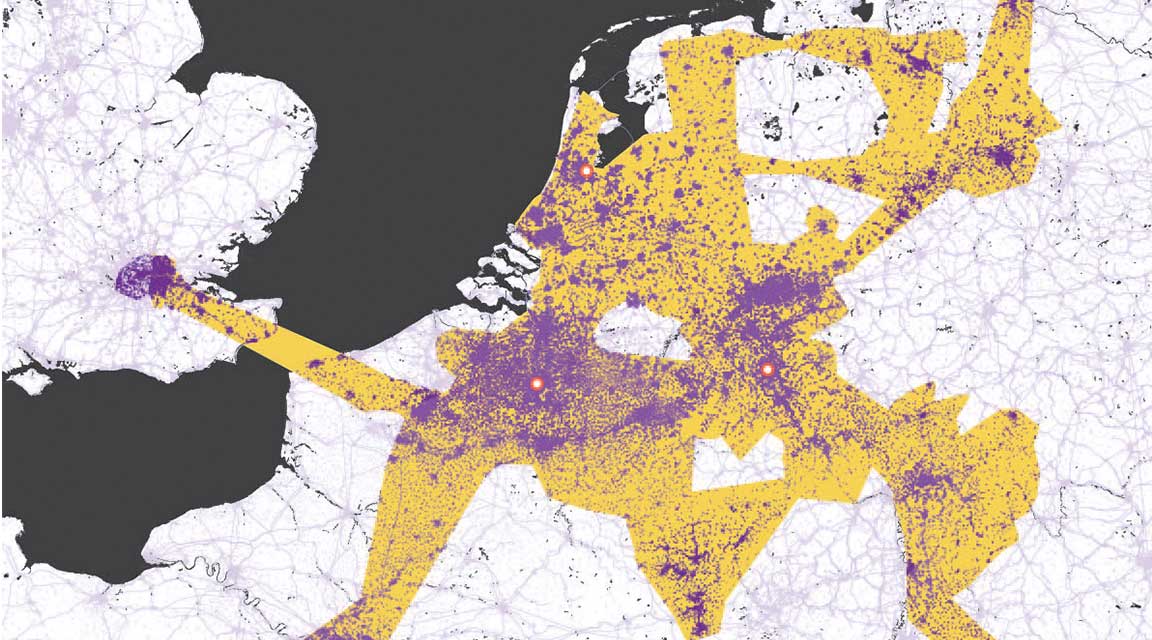 Eurodelta. the Eurodelta-metropolis, the potential reach of Amsterdam, Brussels and Cologne combined

In the years to come, it is highly foreseeable that we are going to see a shift from air travel to rail in Northwest Europe. How can high speed rail connections for passenger transport in the Eurodelta be improved and to which spatial scenarios will this lead?

Northwest Europe is the most prosperous part of Europe. But there are new risks and challenges on the horizon. How about the effects of (a no deal) Brexit on the metropolitan system in Northwest Europe and its competitive strength? How to deal with the mounting pressure towards a more selective use of air travel in a globalized world and in our place? And even important, how to keep up with a much more competitive and dynamic global economic system (Europe-Asia-US).

Improve the synergy of the Northwest European metropolitan regions/ the Eurodelta by connecting them better, realizing so called “borrowed size”. Rail is to take the position of flying in this part of Europe. And that is in line with the challenge to find new and sustainable ways to a better-connected metropolitan system on the scale of Northwest Europe. Existing rail networks and operations need to be “redesigned” with the goal of a better and integrated network (new, improved and optimized) that is able to compete with air traffic on distances till about 600-800 km. With a better network we mean a substantial improvement of the rail connections and the performance of the network two ways: one is to make faster and seamless connections between the metropolitan regions in this part of Europe (creating borrowed size) and the other is making better (fast, seamless, high frequency) connections between the most important nodes in the different metropolitan areas (central districts, airports, internationally oriented business, knowledge and cultural centers, large scale leisure and sports facilities etc).
In this context the airport system and its use can be reconsidered. A shift towards rail will have consequences for the airports, for the regional airports but also for the major hubs. 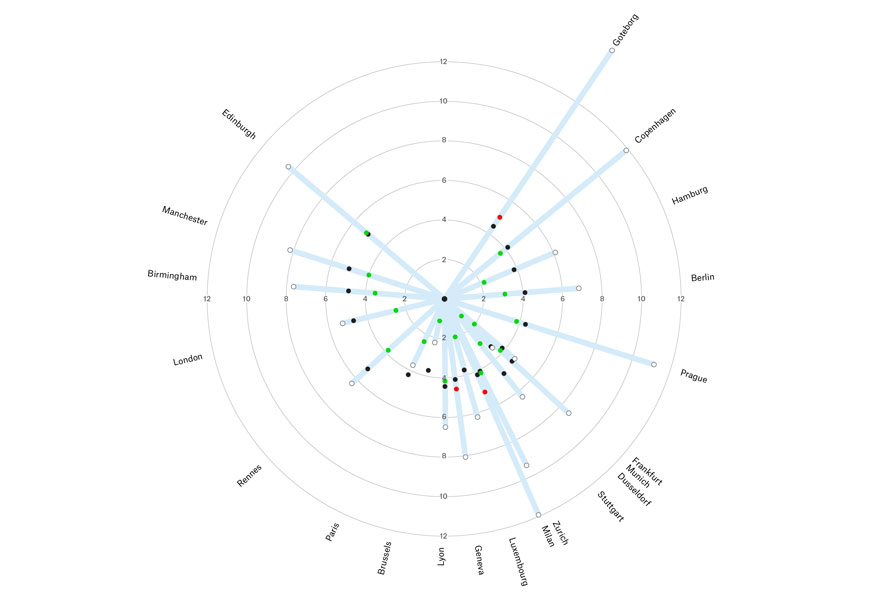 a European HSL netwerk has a huge potential to replace flights, based on RHDHV-report.

Three scales to focus at

To be more precise on this Northwest European Deltametropolis. It’s corner stones are London, Amsterdam, Paris and Frankfurt (LAPF) but one can argue that Hamburg, München and Lyon amongst some others should be on that map too. We consider these urban systems as the surrounding environment of the Eurodelta. It’s not easy to define the different scales properly at this moment in time. More analyses needed and (maybe more important) more support for a new approach on rail networks in this part of Europa.

Within the Eurodelta we should look more closely at the ABC region (once defined by Richard Florida as a coherent urban system): Amsterdam, Brussel, Cologne. Or in terms of their metropolitan system: Randstad/Eindhoven region (The Dutch deltametropolis), Brussels/Antwerp/Ghent (Flemish Diamond) and the Rhein/Ruhr region. We consider the ABC region as a first field of action for a redesigned rail network 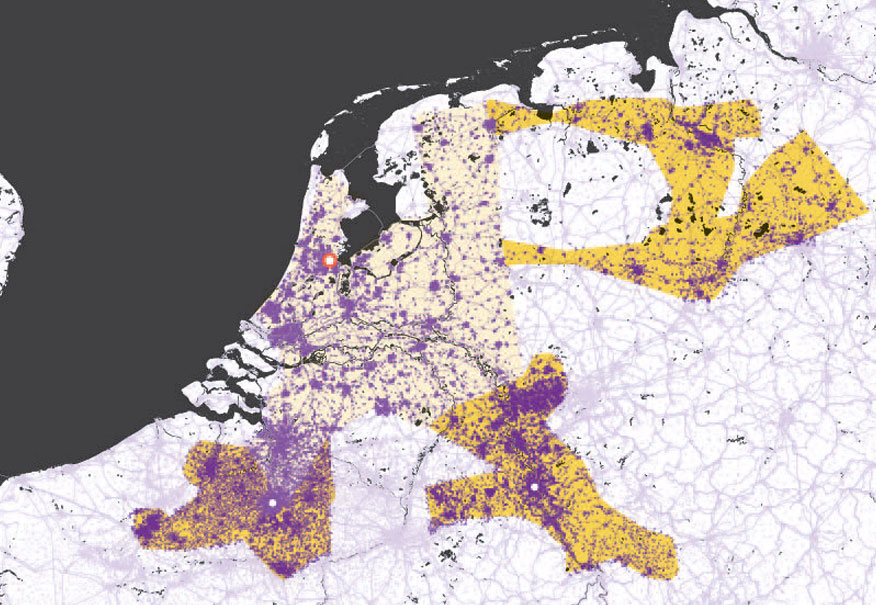 potential reach of HSL from Amsterdam within 2 hours..

Substantial improvement of the rail network can be realized along two lines.

— One is the governance issue. There are (still) a lot of institutional barriers for seamless (cross border) public transport. We are dealing with at least six different countries involved with (most of the times) different railway- and train systems. But it’s also about organization and logistics. It’s about operators that are focused on optimizing their part of the network without creating a more integrated network on a broader scale. Faster connections, a better integrated system, means better timetables and easy transfers to name just some issues. It’s an even more complicated problem if you need two structural changes: a better network on the scale of Northwest Europe and at the same time an improved regional network on the scale of the metropolitan regions in this area. We assume that for this change to happen we need some direction and regulatory authority on the scale of Northwest Europe.

— The other “big thing” is the physical network. We simply need more rails, both in metropolitan regions and between them. And it’s about (fast) high speed and slow (regional scale) at the same time. New lines are needed, and existing lines need to be improved to meet new standards. The biggest challenges are primarily on the international level, a lot of the endeavors needed are of a cross border problem to be solved. This again asks for some sort of direction at the proper scale.

As mentioned before the changes we propose will have effects on the airport system in Northwest Europe. Will this change lead to a better alignment with climate goals and will it at the same time be possible to maintain global connectivity in this area? 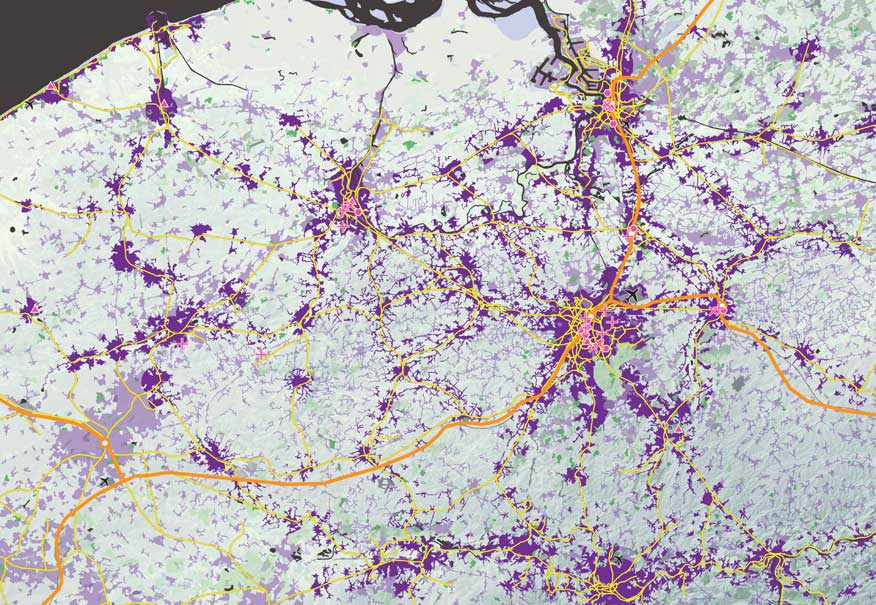 Flemish Diamond. the (intern)national, regional or city network and the international hubs

In our view it’s urgent to strengthen the physics and the performance of the metropolitan system (the total of the metropolitan areas) in this part of Europe, in order to maintain the prosperity and the competitive power in the global economy by reaching new standards for a rail network of the 21st century, sustainable and with an excellent performance.

We are sure that we are not the only institution thinking about this kind of perspectives. There must be a lot of people, institutions, cities, regions and other public bodies) engaged in the same ambitions as we have stated above. Therefore we should seek partners in these metropolitan areas to participate in this project.