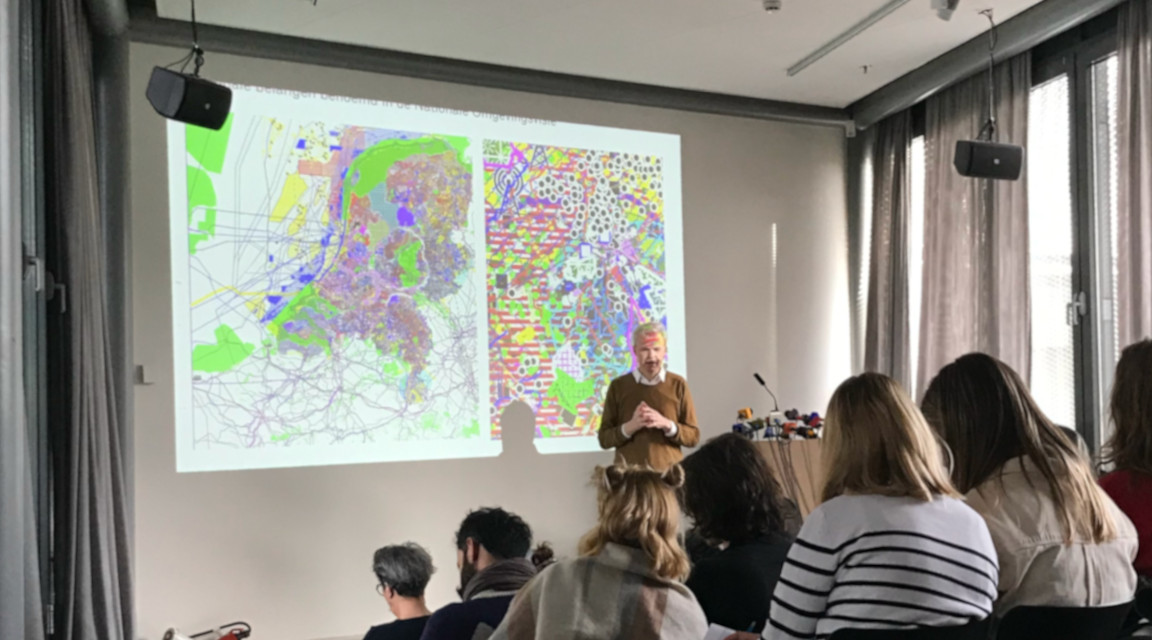 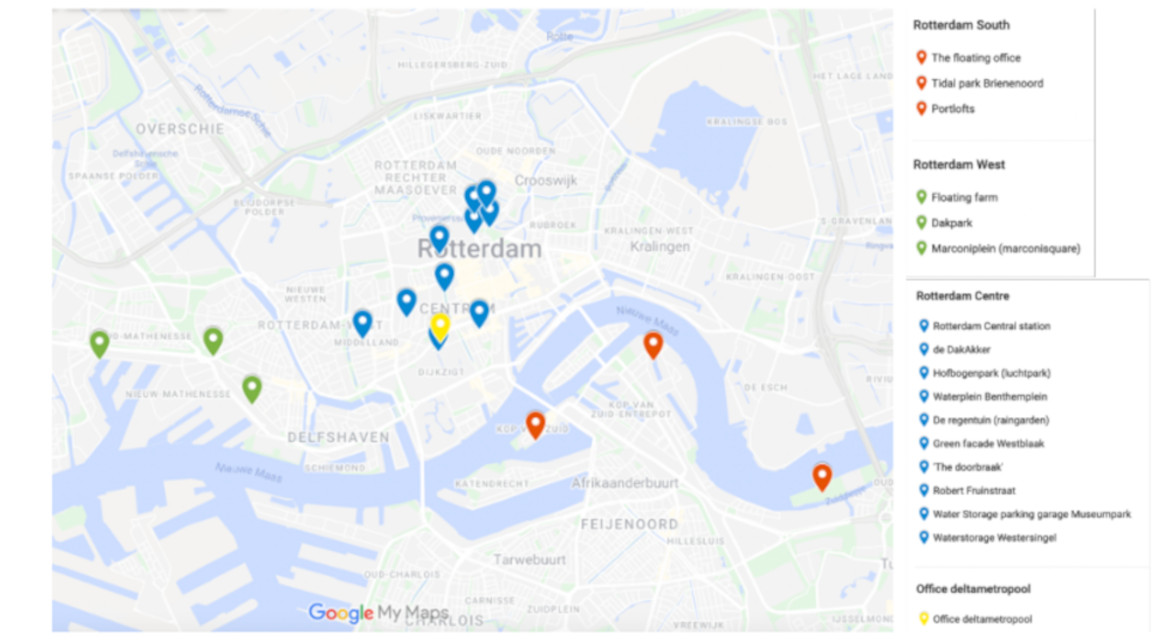 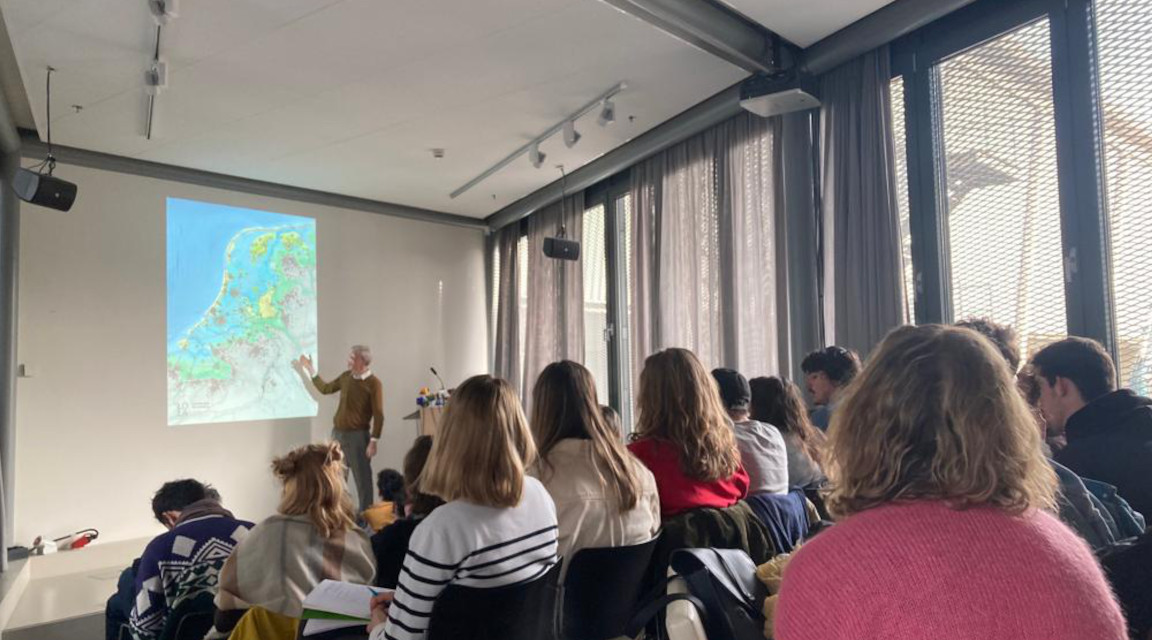 Deltametropolis Association hosted students from the University of Bordeaux for a day around Rotterdam, showcasing many interesting projects on climate adaptation. The program focused on the adaptation of cities to climate change and the risk of flooding.

On the 12th of April, we welcomed a group of students from the University of Bordeaux, France. The students were part of the master studios, “Intelligence et Architecture des Territoires” at Bordeaux school of Architecture and “Stratégies et Gouvernances Métropolitaines” at Sciences Po Bordeaux. The program consisted of presentations and a tour through the city of Rotterdam, on the theme of climate adaptation.

The day began with three expert speakers from Rotterdam on the topic of climate adaptation and elaborated some interesting projects from practice. In the first discussion with Paul Gerretsen (agent, Deltametropolis Association), the long-standing relationship between water and the Netherlands was discussed. The Dutch population has a long history of fighting the water and that is seen back in the planning of the Netherlands. The second discussion was presented by Piotr Kwalbarczyk from one of our members CITYFÖRSTER, an architecture and urbanism practice based in Rotterdam. His presentation was about the project of the Marconiplein, in which the area is changed into a more user-friendly public space instead of a mobility heavy square. The current dike is used both for protection against the water but also for other functions such as shopping. The third discussion was presented by Mona Zum Felde from Defacto Urbanism on the topic of sea level rise in 2100. In this research-by-design, they explored the spatial impact of the accelerated sea level rise. The four scenarios by Deltares defined the cornerstones for possible adaptation strategies (protection, accommodation, coastal advance, and strategic retreat) and were used as a starting point in the research.

After the presentations, it was time for a visit to some real-life climate adaptation projects in Rotterdam. The group was split into three to visit different areas in and around the city. The three groups explored three interesting locations, namely, Rotterdam South (in red), Rotterdam West (in green) and Rotterdam Centre (in blue).

Group one visited the area in Rotterdam west by bike. This contained the floating farm, the Dakpark and the Marconiplein. All these locations are designed to be climate adaptive. The Floating Farm stands for circular farming and is located on water. Apart from the delivery of fresh dairy to the city, the largest portion of the used raw materials consists of residual flows of this same city. The Dakpark (roof park) is one of the biggest roof parks in Europe. It is used for recreation and helps against the urban heat island, functions as sea barrier against flooding and provides water storage. The Marconiplein (Maroconi square) is located on the edge of outside the dike and inside the dike. This area will be transformed into a more logical link between these areas, mostly focused on bikes.

Group two visited the area in Rotterdam South also by bike. These locations were a bit more spread out. The locations that were visited were: the Floating Office, tidal park Briennoord and the ‘Havenlofts’. The Floating Office Rotterdam is a floating office for the global centre on Adaptation. This office is built from wood, and is climate proof and energy neutral. In the tidal park of Briennoord the ebb and flow can flow freely on the banks. On the island of Brienenoord the difference is on average 1,5 meters, but sometimes even 2 meters! In the Nassau port, the floating Havenlofts are located. They have solar panels, generate heat with a biomass installation and they have their own water purification system.

The third group visited the area of Rotterdam Center while walking around the neighborhood. The locations were prominent water storages and acts as green sponge in the area, such as the central station but also the DakAkker and the Hofbogenpark. The DakAkker is the largest outdoor roof farm of the Netherlands and one of the biggest in Europe. Vegetables, edible flowers, herbs, and fruits are grown. A bit similar to the highline in New York, Rotterdam has made a park lactated on an old train station named the Hofbogenpark. The roof of the Hofbogen park will become a garden, walking route, water- storage and purification in one.

The program aimed to show some example projects on climate adaptation in Rotterdam and to exchange knowledge and experiences with the guest students and tutors from Bordeaux. We are always excited to host young planners and designers and provide support to interactive studios such as this. If you would like to collaborate on similar projects, feel free to reach out to us!

nieuws Opportunistic Urbanism 2016 is the first in the series of the three year program by Deltametropolis Association in partnership with TU Delft and Melbourne school of design, as a two way international

nieuws Opportunistic Urbanism 2017 is the second in the series of the exchange studio between Melbourne and Southern Randstad in partnership with TU Delft and Melbourne School of Design. The program is inten

nieuws Opportunistic Urbanism 2018 is the third and final in the series of exchange between Melbourne School of Design and TU Delft. The final year of the program compares the Melbourne’s dynamic design with