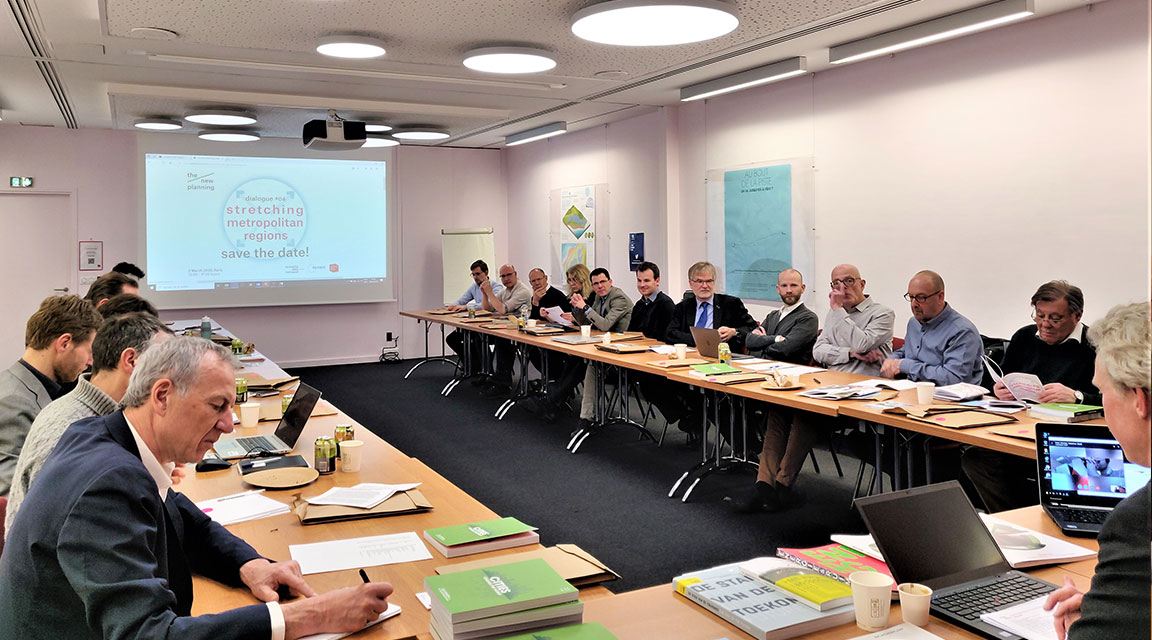 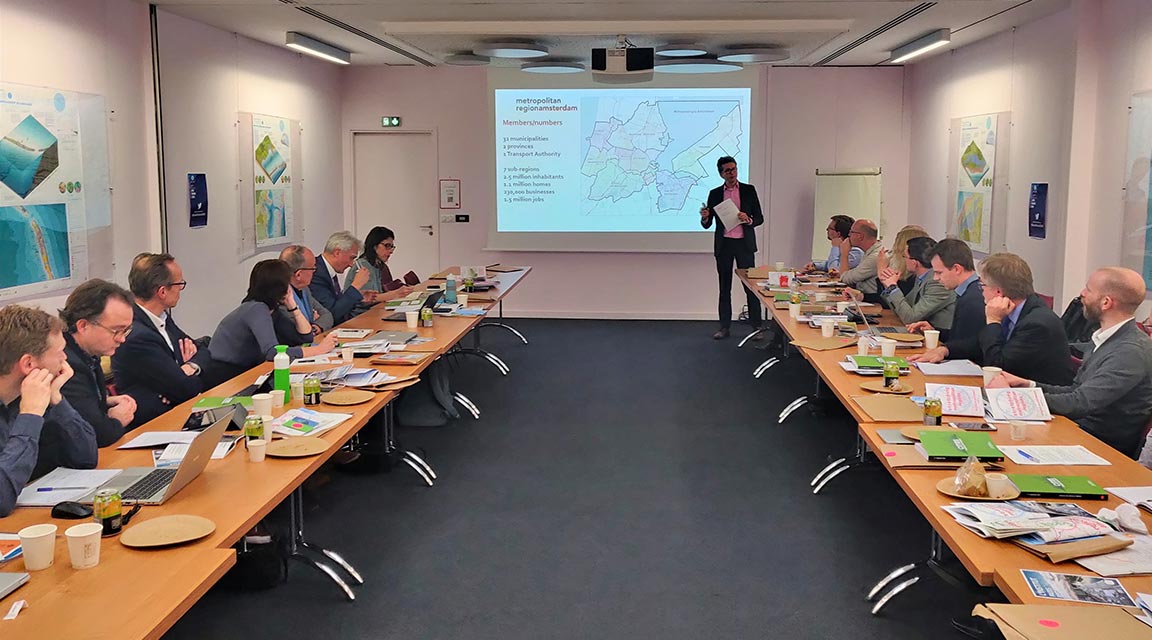 As the fourth step of ‘The New Planning Dialogue’, a masterclass was organised called ‘Stretching Metropolitan Regions’ by Vereniging Deltametropool in collaboration with METREX, Studio Hartzema and hosted by l’Institut Paris Region, in the French capital.

On 2nd march 2020, it was a productive afternoon with many insightful discussions to further The New Planning project. Along with the participants, we discussed the importance of the metropolitan regional scale in planning through an interactive dialogue with narratives from different case studies. The session was organised with 35 participants coming from different European Metropolitan Regions. Three regions of the Netherlands was represented, as well as Germany, France, Italy, Belgium, United Kingdom and Spain with a sectoral focus in 10 different metropolitan regions.

Along with an expert audience of planners, policy makers and academicians, the ambitions of this ‘one afternoon dialogue’ was to share knowledge, create good narratives and specify aspects of typologies in search of apt solutions for the Metropolitan Regional scale.

During this workshop concentrated on the scale of Metropolitan Regions and their approaches. This regional context gave us the opportunity to open up to the European context and explore and learn from the diversity in planning approaches depending on the political and geographical frame. The dialogue alternates presentation and discussions about typologies, set-up, approaches and collaborations, as resumed here.

The workshop consisted of three different “discussions sessions” with relevant speakers depending on the theme, able to study and exchange about the Metropolitan Region they are representing.

What is the metropolitan scale? And what are the concepts and practices, the future challenges and what changed in the overall planning of metropolitan regions?

Vivianna Rubbo gave an introduction of her research work, as Bernd Steinacher Fellowship researcher at Metrex; on a broad overview of the agenda and questions that the analysis of European Metropolitan Regions brought up. The understanding of “how the territorial reality can be aligned with the governance structures” is the goal of the many efforts undertaken so far and explored in this research. Lawrence Barth reflected on the presentation, what changed in the overall planning of Metropolitan Regions in the recent years. ANCI (Associazione Nazionale Comuni Italiani), joined the conversation via skype regarding the institutional approach of the Italian cities and the structured working methods towards challenges.

The discussion went parallel with the cases of Frankfurt (Reinhard Henke) and Paris (Paul Lecroart), which focuses are on the development of spatial planning decisions and strategic steps towards the developments. The Metropolitan region of Torino (Claudia Fassero) could briefly attend the discussion via Skype and talked about the economic, social and urban development in Torino in a homogenous manner.

Paris focused on the infrastructural aspects with Grand Paris redevelopment, Brownfield regeneration, Europacity- Greenfield Megaprojects and bottom up park oriented Regeneration. Frankfurt Rhein Main on the other hand focused on the political and institutional developments that impacts the territorial decision for the regional authority.

These presentations and comparisons raised questions such as how Metropolitan regions actually determine their focus on planning approaches, whether spatial planning or strategic planning should be the focus on this scale. Obviously, the differences in political and geographical setting helps contextualizing these contrasted planning approaches.

The formation of Metropolitan Regions.

To reflect and conclude the afternoon, John Worthington from London, Alain Thierstein from Munich and Rudiger Ahrend from the OECD wrapped up the conversation by introducing inspiring open questions on which we should all reflect on. John emphasized on understanding the differences and process between ambitions to expectations. Alain projected the ideology of ‘Structure follows Strategies’ and how a network approach creates more impact. At the end, Rudiger concluded the session saying, Metropolitan regions is the most important scale for public transport and environmental urgencies and there will be no solution that fits all metropolitan regions. While working on visions or strategizing for regional scale, it is necessary to sharpen the focus between Bottom-up/ Top-down, formal/informal structure, simplicity/ complexity and adding up the factors of success, time and geography. The conversation ended at the note of ‘Housing might be needed to be added in the scope of metropoolregions’ as a food for thought.

Following are some interesting reads, provided by Rudiger Ahrend from his OECD  documents on Metropolitan governance that may be of interest to the workshop participants.

— a report called “Governing the City” and link to the policy highlights of this report for those with little time to read.
— an EU-Vox blog on why metropolitan governance matters, read here.

We had a lot of interesting discussions and we are working on the outcomes and reflections from the event. Thank you to all our participants and collaborators who joined us at L’Institut Paris Region.

Join the dialogue to opinionate, influence and revolutionize the planning model and support the project by your eminent participation.

Follow the link to know more about the project and connect to us .

activiteit, workshop 'Stretching Metropolitan Regions' is a masterclass and workshop organised by Vereniging Deltametropool in collaboration with METREX and hosted by L’ Institut Paris Region, in the French capital. On th