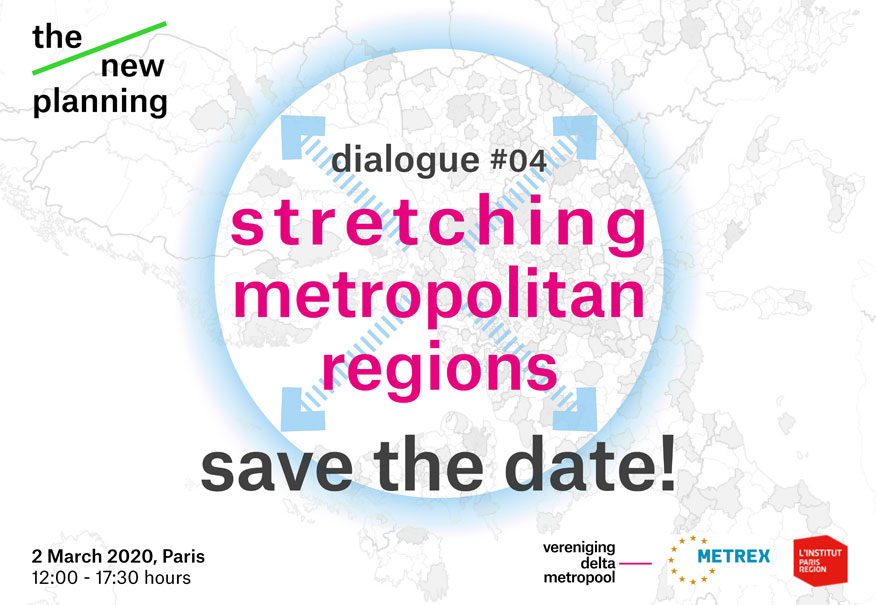 'Stretching Metropolitan Regions' is a masterclass and workshop organised by Vereniging Deltametropool in collaboration with METREX and hosted by L’ Institut Paris Region, in the French capital. On that day, we expect an interactive and explorative dialogue with different European Metropolitan Regions in order to share knowledge, create good narratives and specify aspects of classification and typologies of the Metropolitan Regional scale.

The 20th century has witnessed a progressive “metropolization process” of the European territory leading to a nearly three-quarters of the European population (Eurostat, 2014) living in metropolitan and urban areas. “The limits of what we understand to be urban and extended in constant evolution (Mariona Tomàs, 2015) raising questions regarding the effective forms and models of governance that better respond to the challenges posed by the metropolitan phenomena. Those embrace different dimensions: social (combining inequalities, ensuring access to public services), economic and financial (guaranteeing competitiveness and efficiency); territorial and environmental (the management of urban explosion, mobility and waste);political and institutional (the co-ordination of policies and services, democratic representation) (Mariona Tomàs, 2015).

In this workshop we concentrate on the scale of Metropolitan regions and their approaches. During the previous activity of the New Planning, there was a strong focus on the regional scale from all the experts and organizations. At the same time we would like to take the opportunity in The New Planning progression, to open up in the European context and explore the diversity in planning approaches at the metropolitan region scale. The political or geographical frame and structure of the metropolitan regions varies in each European country. Although, in the times of changes and transitions, this scale is equally pressurized to act and improvise in each country. The issues and challenges remains the same.Yet, the solutions vary depending on the contextual set-up and planning systems. Thus, we would like to discuss the typologies, set-up, approaches, collaboration and sectors and the planning of metropolitan regions in this meeting.

Session 01: What is the metropolitan scale?

What is metropolitan scale? What are the Concept and practice, Future Challenges. What changed in the overall planning of metropolitan regions?

The difference in the political and geographical setting contextualize a contrasting planning approach . With the two examples presented during this conversation, we will learn the stark differences in the planning approaches and their impact and consequences.

13:05 – Introduction to the program by Paul Gerretsen (Director, Deltametropolis Association)

Session 01: What is the metropolitan scale?

17:00 –Conclusion and wrap up by Paul Gerretsen

This is the fourth event of The New Planning Dialogue in partnership with Metrex and L’Institut Paris Region, in the series of eight inspiring activities in the upcoming years. The conference has been developed by the Delta Metropolis Association together with Delft University of Technology, European Policy Research Center and University of Groningen.

nieuws This is a call for action. And primarily a call for participation. Why “new planning”? Because we think that the mainstream planning, with its traditional methods, does not work efficiently anymore wi

activiteit, bijeenkomst To enlarge our consortia for this new research project 'The New Planning' we are organising a matchmaking event on 1st November 2018.