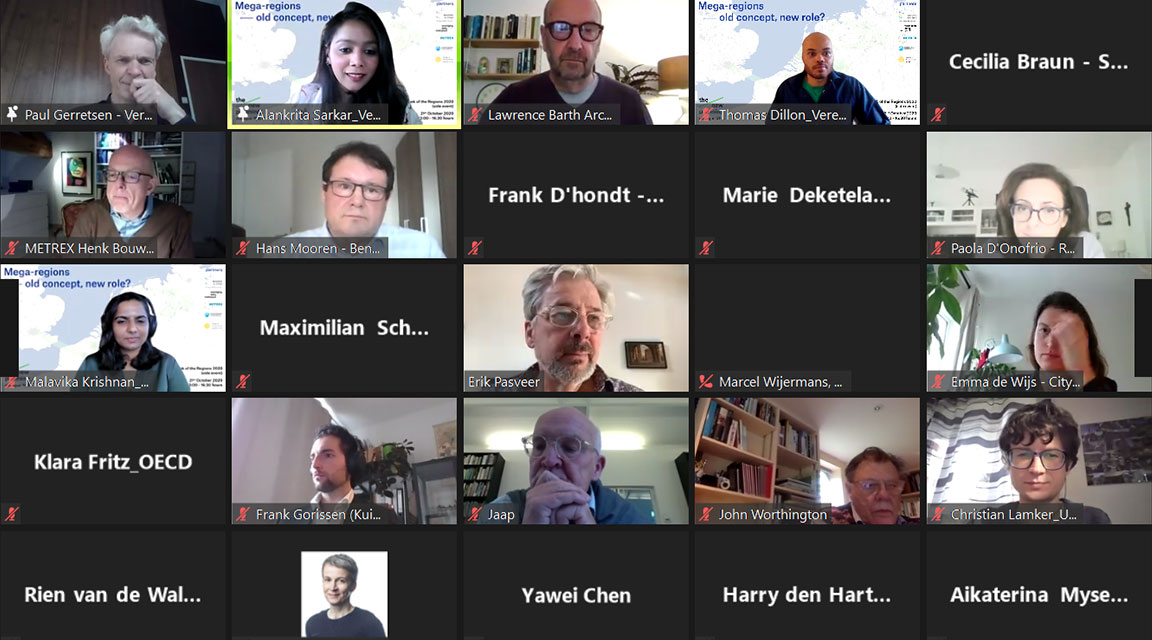 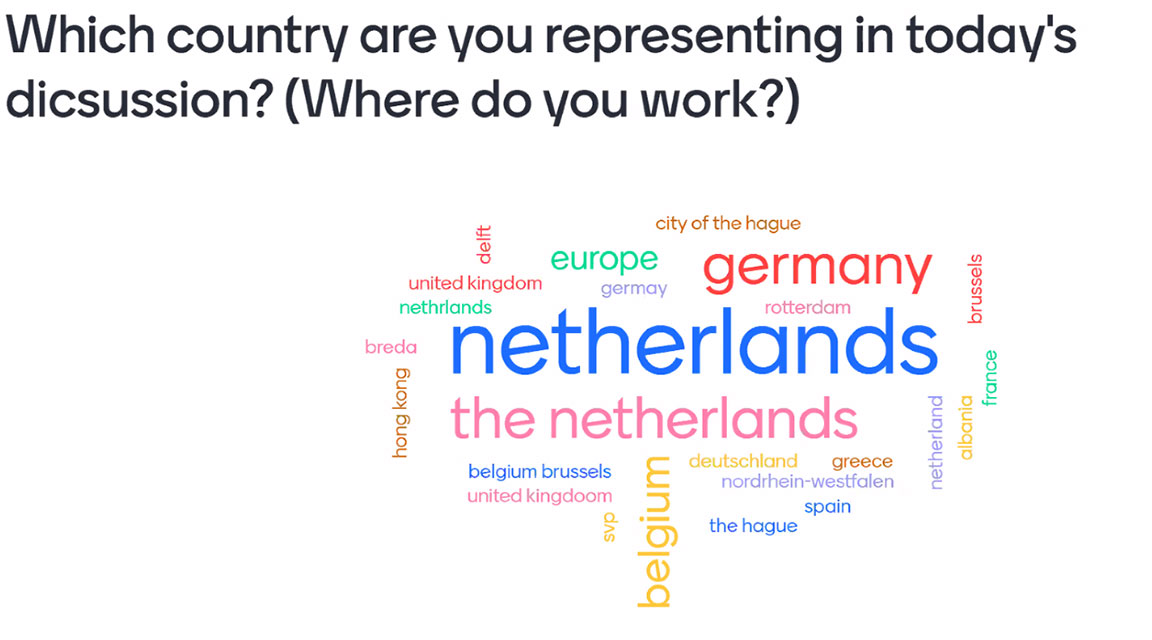 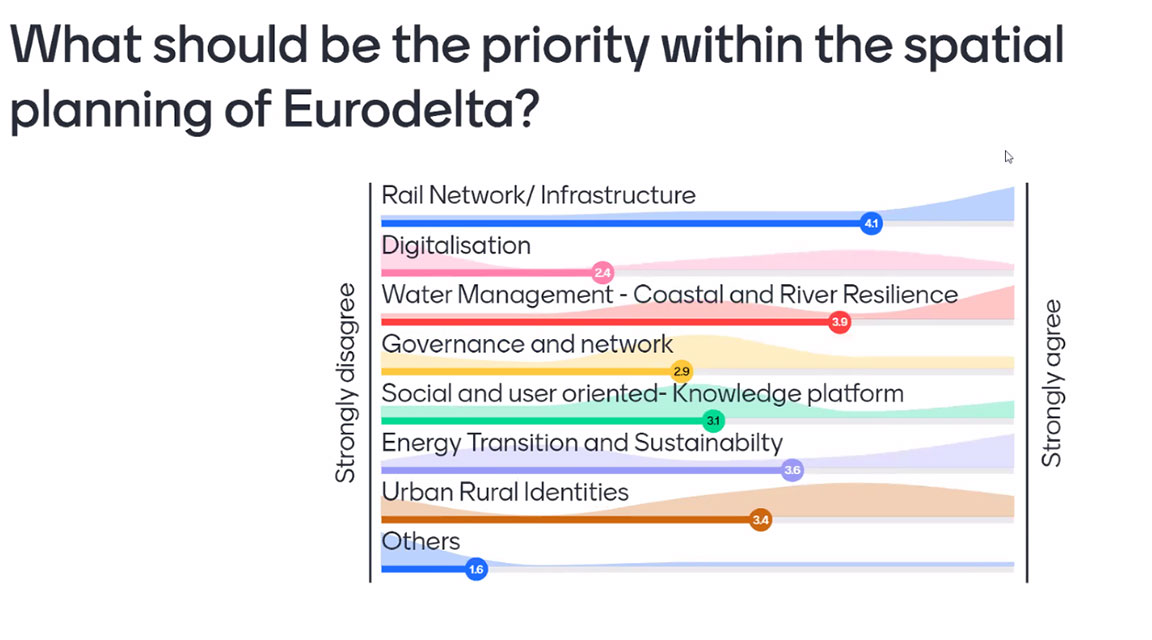 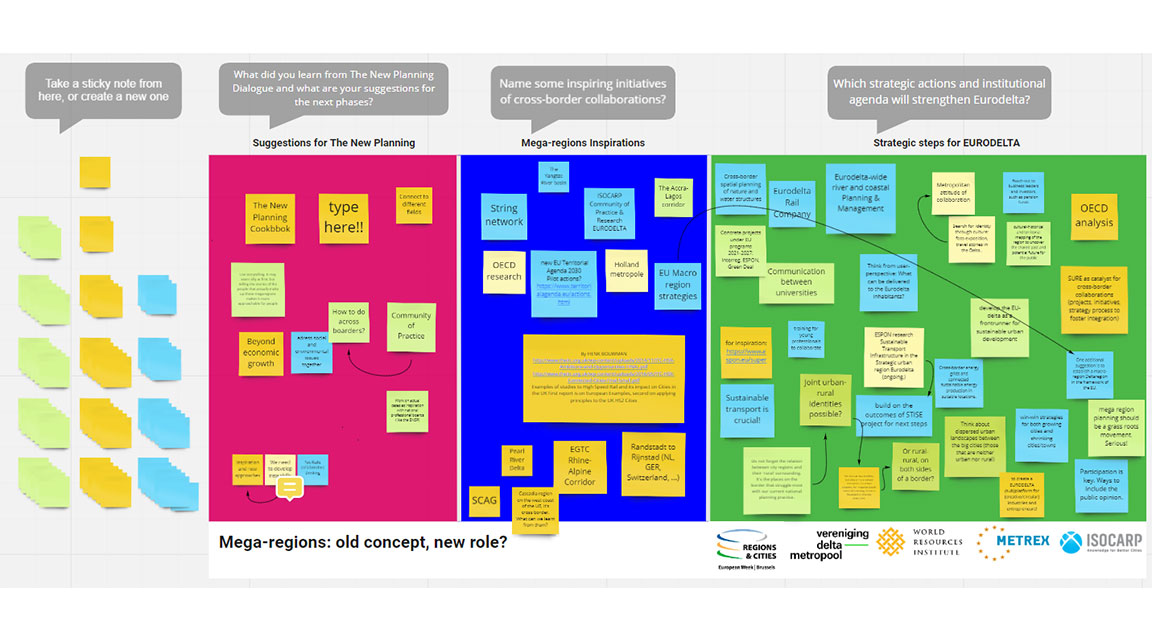 ‘Mega-regions- Old Concept, New Roles?’ was the final event of The New Planning Dialogue. This reporting back article on the online session focusses on the topic of cross-border collaboration within various mega-regions such as the Eurodelta with discussions from speakers and audience from various parts of Europe.

‘The New Planning Dialogue’ series came to an exhilarating end with its last event, ‘Mega-regions; old Concept, new roles?’ It was organised by Vereniging Deltametropool, as a side event within the 18th European Week of Regions and Cities, in partnership with ISOCARP, METREX and WRI.In this discussion we made an attempt to understand how mega-regions like Eurodelta, can become a catalyst for a sustainable green recovery. We focused on some of the inspiring initiatives of cross-border collaborations with presentations on SURE network, GO Europe GO Rail and tips and tricks from the STRING network. We also looked at what are the strategic actions and institutional agendas to strengthen the Eurodelta through panel discussions from experts from network organizations, institutional and political realms. The event also had an active audience interaction with questions and ideas shared by our participants using MIRO,  where we encouraged the participants to put down their opinions. Overall, the event marked the end of The New Planning Dialogue,  concluding suggestions from the New Planning enthusiasts and steps to move forward to keep the discourse alive!

The event started with the presentation from Dr. Cecilia Braun, a spatial planner and consultant based in Cologne on the ‘Eurodelta-SURE’ network initiated by METREX. SURE Network is a joint venture with various organisations such as Vereniging Deltametropool, municipalities such as The Hague, Amsterdam, Brussels and other potential partners from metropolitan regions from within the Eurodelta. The main aim of the network is to increase awareness and relevance of  Eurodelta as one mega-region and showcase the advantages of cross-border collaboration on this scale. Cecilia explained the importance of SURE network as a facilitator/organiser of the territory of Eurodelta, a highly dense urban area where 45 million people live, commute and work. She directed the discussion towards many benefits of such a structured framework in terms of scale, regional and international mobility as well as nurturing shared values. Keeping these in mind, it is important to have a spatial strategy for the region with proactive contributors from within the area towards developing an economic vision for the region. This could be facilitated by SURE network as they provide the opportunity for participation and raising funds.

Adding to that, Jaap Modder (spatial planner and consultant)  unfolded the discussion on ‘Go Europe Go Rail’ project. This project is for connecting the mega-region by High Speed Rail aimed at improving the competitiveness of Europe. He argues that Eurodelta has the potential to be Europe’s most prominent mega-region. However, in order for this to happen, we need a denser strategy for the region. For the Eurodelta to perform better we need a denser strategy. This could be through implementing the High Speed Rail gradually, or can we develop a corridor approach towards this? He says that we can start by connecting the airports in the region. Jaap also points out that we will also have to take into account the corona crisis, but with the European Green Deal, the economy will need strengthening and this could provide that opportunity.

“Eurodelta planning should focus on realizing a better and faster rail network in order to improve the interaction between the metropolitan areas and reach a new level of borrowed size.”
— Jaap Modder (spatial planner and consultant)

Frank, with his experience working within Eurodelta and ISOCARP for over 20 years says, territorial integration of North-Western Europe is coming back and that there’s a growing need focus on this. He talks about bringing in a comparative analysis to enable us to learn from each other and to establish a community of practice. This can lead to creating new types of collaboration. He states, ‘Eurodelta is a pioneer in transnational planning of the area’. However, this requires discussing various perspectives, and advocating for a greater integration. This would require a governance level at the Eurodelta scale. ISOCARP is ready to go with the launch of a community of practice on Eurodelta..

“The Eurodelta together with the mega-region will be the first pioneers in transnational collaboration of planners in the area.”
— Frank D’hondt (Secretary General, ISOCARP)

Henk Bouwman responded that the infrastructure in Europe has been proven to work. He talked about the example in France, where the regional trains pose a problem as most of the infrastructural development is from a planner’s perspective. But he says that instead we need to have a more metropolitan attitude as this could lead to collaborations being successful. In France, the High Speed Rail was started by the industries and only later on was embraced by the state. Therefore involving more private and public partners, and representatives of civil society is crucial.

“If you could show the national government that companies prosper by collaborating in an area like Eurodelta, I think that will be a very strong message. Much stronger than anything planners can think of.”
— Henk Bouwman (Secretary General, METREX)

Marie Deketelaere-Hanna (Inspector General, General Counsel for the Environment and Sustainable Development, Paris) also agrees on this with Henk as she says citizen and bottom up movements are very important. She points out that it is not possible to move all air traffic to trains without a good bottom up movement.

Thomas Bekker (managing director, STRING network) gave his presentation on the learnings from the STRING network and some strategic actions that can be useful to the Eurodelta. He says, what happens in real businesses and between people is rather a tearing down of the borders. Mega-regions are the economic centres of the world as growth is now not necessarily around capitals, but rather around regions that have commonalities. By connecting Oslo and Stockholm spatially and digitally, you are creating a mega-region. He also gives the example of the pharmaceutical hub in Southern Germany, Switzerland and Austria which led to formation of a mega-region. He says Europe should focus more on such collaborations and create itself around these mega-regions. He points out the importance of a territorial agenda incorporating ideas from individual regions and cities. This will allow for a successful cooperation in Eurodelta similar to that of the STRING network.

“Europe form or create itself around these economical muscles that are these mega-regions.”
— Thomas Bekker (managing director, STRING network)

Similarly, Cecilia Braun also added some examples from the German perspective while working towards the ROADMAP of Eurodelta-SURE.

“The SURE network aims to increase awareness of the Eurodelta as one mega-region and showcase the advantages of collaboration on this scale.”
— Cecilia Braun (Spatial planner and consultant)

Panel Discussion 2: What are the strategic steps from the Decision-makers for a cross border cooperation?

Hans started the panel discussion by introducing the work of Benelux Union, a collaboration between Belgium, The Netherlands and Luxemburg. The three countries laid the structure for what would later become the European Union. This meant thinking beyond borders and moving towards a purely economic union with a more diverse cooperation. He says, that in such collaboration the common aim should be to make it work!

“The Benelux Union as a facilitating body of the three countries is open to welcome the dialogue between the central governments and the knowledge platforms”
— Hans Mooren (Policy Advisor, BENELUX Union)

Erik Pasveer from city of Amsterdam  states, we need to make room on existing rail for more international networks. Starting with the regional nodes and connections, we can utilize the true benefit of the scale as well as the cost. This also takes into account not just the European Green Deal but the various other transitions going on in the territory. He says that an agenda for High Speed Rail could be in conflict with regional strategies and hence the policies should be adaptable and doable for politicians. This means more synergies and a model such as poly-nuclear structure, which could be an interesting approach. He recognizes that we have a governance problem as remaining centralized is far easier to control that decentralized.

“If we make sure that we use the potential of borrowed size, there is a benefit of scale”
— Erik Pasveer (Head of Startegy, City of Amsterdam)

A knowledge platform is crucial to come forward with comparative analysis and develop ideas. Paul Gerretsen along with our participants and speakers concluded the session by bringing forward some of the key points from the discussions. Frank D’Hondt also added that the  knowledge platform should become attractive for various businesses and overcome various cross-border policy restrictions such as Brexit in the future. Hans also pointed out that the Benelux Union will also welcome such a platform and aim to establish a dialogue with the national governments.

We are working on reports and papers on each subject that can be combined together in a publication format at the end of The New Planning Dialogue. The publication “The New Planning Cookbook” will showcase the results and process of the dialogue. The expected outcome will provide a new model, a co-created framework for city planning. This will act as a support to put research into practice, with the creation of an efficient working method with the involved practitioners.

Thank you to all the participants for joining us online and a special thank you to the collaborators that made the online session possible, our speakers as well as from team Deltametropool.

Join the dialogue to opinionate, influence and revolutionize the planning model and support the project by your eminent participation.

Follow the link to know more about the project and connect to us .

nieuws ‘The New Planning is a movement in our profession’, quoted as a concluding remark by Tracy Metz, during the International Conference, ‘Take on the Future’ (December 2019), best summarizes the project

activiteit, bijeenkomst This is the final event of the ‘The New Planning Dialogue’ series organized by Vereniging Deltametropool, as a side event within the European Week of Regions and Cities 2020, with ISOCARP, METREX and