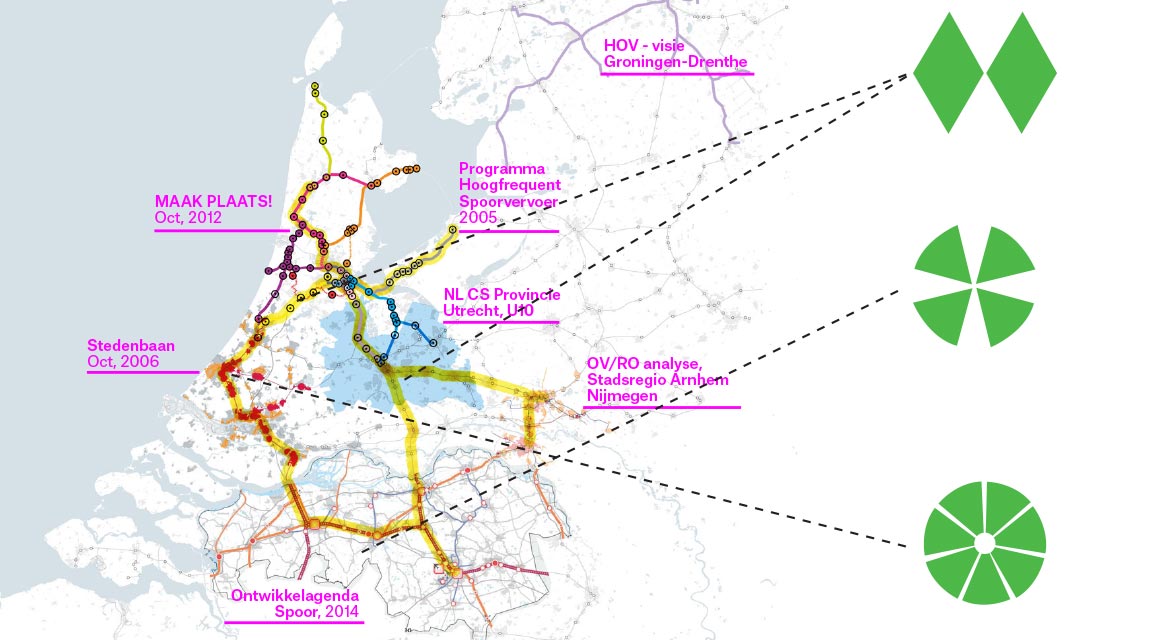 Overview of TOD policies in the Netherlands.

The development of TOD policy in the Netherlands has resulted in a many tools that link spatial development to transport. Today there is a lot of available data on accessibility and urbanization. However a national standard for what TOD should deliver is lacking.

The development of TOD policy and models that have emerged from it goes back about 20 years in the Netherlands. In 1999, Luca Bertollini’ ‘Het Knoop-Plaats Model’ or Node-Space Model, was the first model to make the relationship between transport nodes and spatial quality explicit. With Stedenbaan in 2006, South-Holland was the first province where agreements about coordination between spatial development and public transport infrastructure were reflected in policy making. By 2020 many provinces have followed suit. The map illustrates the policies developed by different provinces in the Netherlands. All similar but different, diverse attempts at delivering and improving TOD policy across the country exemplifies the intention of a well-rounded public transport and urban system.

Various models have been developed to support the policy choices. Some examples include, the Vlindermodel in Noord-Holland and Utrecht or the Kwadrantmodel in Noord-Brabant. Today there is a lot of data on accessibility and urbanization which can be visualized and linked to provide new insights into the optimal use of public transport hubs. However a national standard is lacking. What is the most accurate way to calculate quantitative factors such as density, mixed functions or accessibility? How should the environment quality at/around the station be evaluated? What are the sustainability requirements of station nodes?

In 2018, the Ministerie of Infrastructuur and Waterstaat (Ministry of Infrastructure and Water Management) drew up the ‘Handelingsperspectief’ (Prospective action for public transport hubs), which is intended as an instrument to jointly map the current and future situation of transport nodes. The Handelingsperspectief was developed as a response to the Contouren-OV Toekomstbeeld 2040, which is the common national vision on public transport, and can help to gain a picture of the current and future functioning of a public transport hub and its surroundings. The Contouren-OV Toekomstbeeld 2040 consists of actions, one of which is action 16 that advocates for making better use of public transport to create a barrier free journey for all travelers. There is a call for local and regional authorities to develop a ‘Model Informatieprofiel Knooppunten’ or MIK with relevant stakeholders.

The purpose of MIK can be interpreted as a means to bring together different data and materials to create one national standard for node development. The MIK emphasizes the connection between the node and spatial development. This action provides a space to step into the future to explore opportunities while being grounded in present conditions. This is because MIK advocates for the use of existing data such as the Dashboard Door to Door (by CROW) and MAAK PLAATS! (co-authored by Vereniging Deltametropool and the Province of Noord Holland) before widening the search for more data and creating new analysis methods. An unambiguous way of dealing with and interpreting data is important in order to be able to make use of the Handelingsperspectief and develop MIK.

Comparing the Handelingsperspetief to existing models

There are broad themes in the Handelingsperspectief with several questions under each theme. These are:

— Node: This theme is concerned with factors within the node such as the available facilities, sustainability objectives and climate adaptation response, transfer bottlenecks etc.

— Mobility: This theme addresses mobility related quantitative factors such as the number of trains and BTM, share of traveller who come to the node via bicycle or cars, parking facilities for bicycle and cars etc.

— People: This theme is concerned with the type of travellers, customer satisfaction and social safety around the nodes.

Results and next steps

One of the biggest questions that needs to be clarified going forward is about the way to address quantitative factors. What are the sources of data that should be used? What is the range of area considered around the station? How often is an update needed? It appears that the different models adopt different calculation methods and sources of data. This needs to be rethought based on availability and accuracy of data. The Dashboard Door to Door and Mobiliteitsscan are useful data interfaces that provide a good starting point to answer some of the questions and also evaluate the missing gaps.

So what are the common factors that all three models address?

And what do all the models fail to address?

Transfer bottlenecks, types of travelers, sustainability requirements, social safety, customer satisfaction, position of the station in the network, location of the environment.

It is interesting to note that the Handelingsperspectief has an equal emphasizes on the qualitative aspects under every theme, whereas this is sidelined in most of the existing models. This is perhaps yet another improvement to TOD models in the Netherlands.

CROW has taken the initiative to initiate action 16 (MIK) with the Deltametropolis Association. Within the ‘Ketens en Knooppunten’ program (Network and Node Program) of the Ministerie of Infrastructuur and Waterstaat, nine cases have been selected where the Handelingsperspectief will be applied. In the next phase, these nine cases will also be used to develop and outline of MIK and determine what data and/or instruments belong in it.

Would you like to contribute to our project through your knowledge from practice or research? Your input and insight is always welcome!